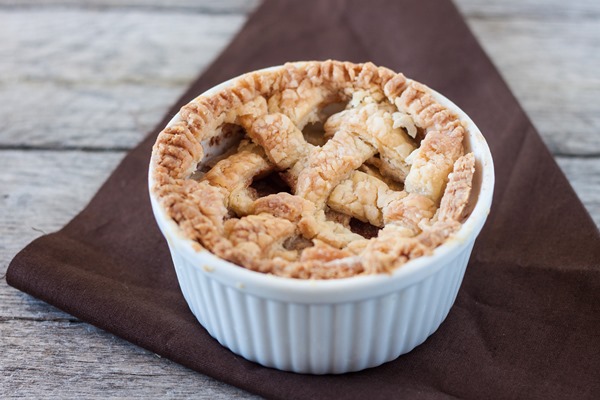 This might not be qualified as an actual “post” since in reality it is only a quick how-to. Really it’s just me showing off my adaption of the recipe into single serving pies.

The reason you only see one pie in the pictures is that we ate all the rest of them the night before I took pictures. I try to avoid taking pictures at night AT ALL COSTS. The light is horrible. It would turn my mediocre pictures into awful ones. And the YELLOWNESS of the resulting images. Bleh.

Another thing: I ran out of time to let my crust sit in the fridge to cool, so the butter never hardened up again, which is why the crust in said pictures appears slightly “melty.” If you give your crust plenty of time to cool, you won’t have this problem.

You also won’t have to make as many pies as I did. It took me forty-five minutes to do all those basket weave things on nine different single serving pies. THAT is the one downside to single serving pies. That might also be the downside to having a large family. Don’t get me wrong—there aren’t many downsides. On the upside, it’s never fun to be weird by myself, but since I’ve got a large family we can all be weird together.

So maybe next time I’ll just make a regular pie and not bother with the single servings. I’m not sure what will happen when I leave home and end up cooking for no one but myself. It will be somewhat lonely, because I’ll be stuck making large batches of everything.

It’s sad just to think about it. Moving on. 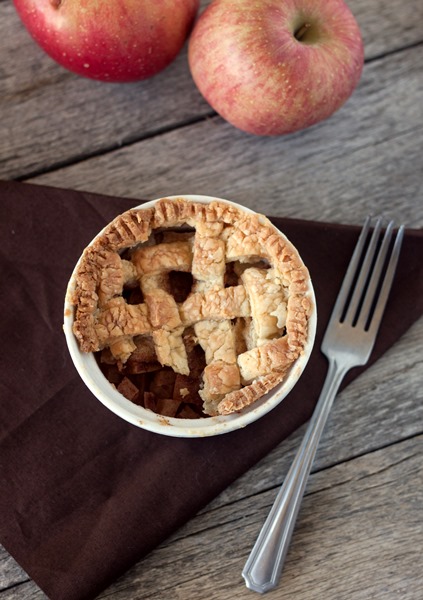 Make 1 batch of this crust. I made two batches for nine, so if you’re making four or five 1 batch will work perfectly. Put the crust in the fridge to cool.

Cut up five medium sized apples. You can either dice them into little chunks or slice them into perfect thin apple slices that you will then arrange perfectly in the dish. Your choice.

Put the apple slices in a bowl and toss with 2 teaspoons cinnamon, ½ teaspoon nutmeg, 4 tablespoons of butter chopped into little pieces, and about 2 tablespoons of brown or white sugar. I actually used melted honey, which worked just fine.

Divide the apple slices into four or five ramekins. Depending upon how big your apples were, you may need to cut up one more apple. Set the ramekins aside.

Put a sheet of wax paper on the table and sprinkle it with about 3 tablespoons of cornstarch. Roll the pie crust out on the wax paper, then slice it into narrow strips. Use the strips to weave a basket pattern over each dish. You could also just cut large circles of dough and set them in the dishes.

Form your edges and make your crust look all pretty. I just went around the dish making little lines with a fork. That’s a fast method that still looks nice.

Repeat the above process with each pie.

If it took you more than 15 minutes to cover all the dishes, then put them in the refrigerator for about half an hour in order to allow the butter to harden back up again.

Stick them in the oven at 350 degrees F. Cook for about an hour, until the crust is golden brown and the apples underneath it look soft and juicy.