I stumbled upon Pure7 Chocolate about a month ago through a link on a blog and was immediately impressed by the short, organic-only ingredient list and their beautiful website (because, okay, who isn’t impressed by a nice website?).

So, liking what I saw, I contacted them and asked them if they had an affiliate program. Originally I was just thinking something along the lines of a picture on my sidebar leading to their site or something (or what was I thinking? I’m not sure. I tend to rush into things headlong and emailing them seemed like a good idea at the time. Turns out it was). BUT, they responded inviting me to try the chocolate and write a review.

(2.) I can’t blow bubblegum bubbles and one time at kid’s camp when I was seven they had a bubble-blowing competition and I couldn’t blow a single bubble. So I started crying and my entire camp experience was ruined.

(3.) Chocolate is amazing. When invited to taste chocolate, never ever say no.

So, long story short, 2 weeks later there I was with a box of amazing chocolate in my hands.

None of my sisters could wait to open it. I could’ve waited. Centuries.

All right, fine, I couldn’t have.

We ripped it open and beheld the chocolate in all its glory: 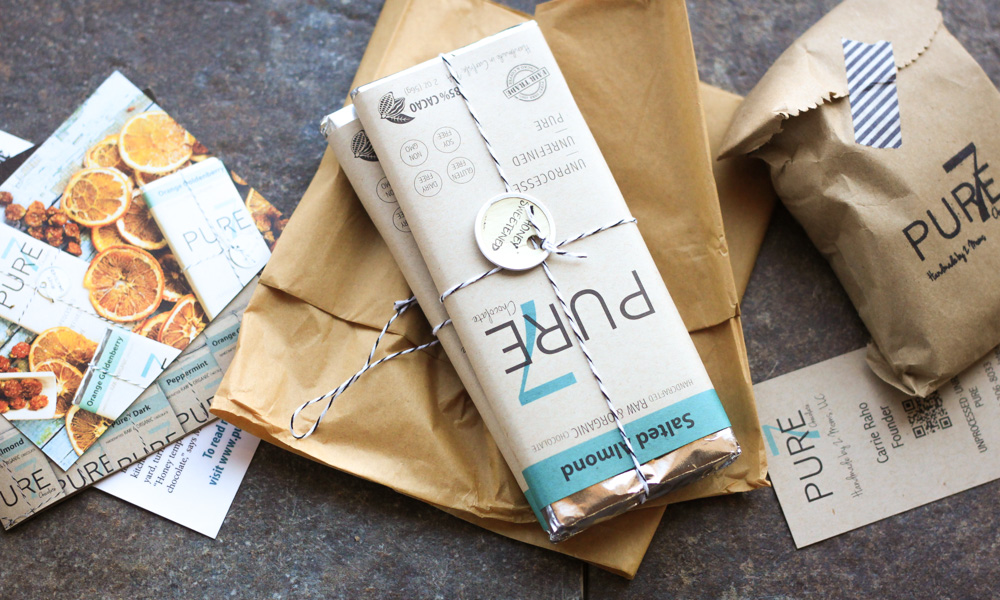 Slowly, slowly, (but not too slowly), I unwrapped the raspberry chocolate bar in all its dark beauty. 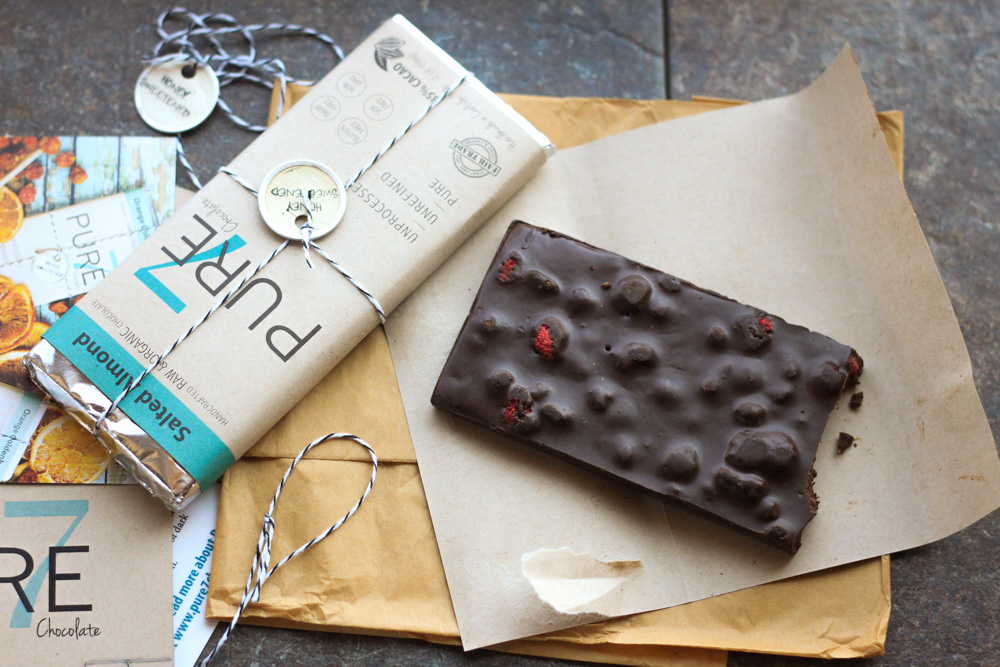 Then I passed the chocolate around (generous, I know).

We ate in silent enjoyment and decided to become professional chocolate tasters for life.

So that’s part of the reason Pure7 chocolate is good: Because it’s real and I love what Carrie and Julie are doing. 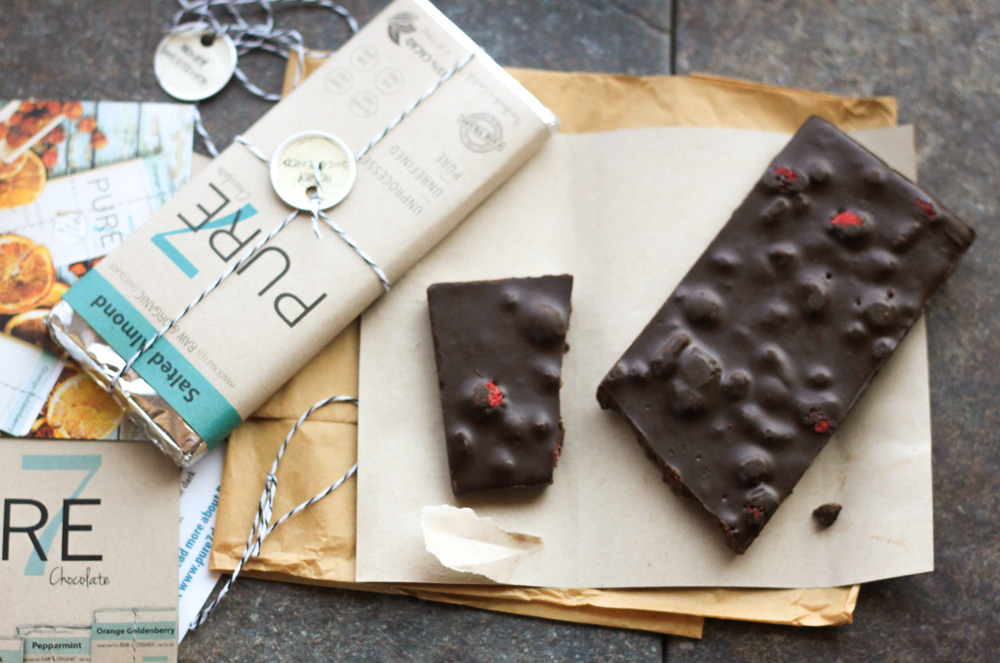 I asked all my “taste tester” sisters and a lucky friend who happened to be over for a few days to give me their short opinions. So, here they all are:

Lucky Friend: “Flavor: I especially enjoyed the flavor of the Bites, though I’m not as fond of raspberry. I felt like the berries detracted from the chocolate itself. Texture: Slightly chewy in the beginning but then melts fabulously in your mouth. I’d buy it.”

Sister 1: “The salted almond one was a little too salty for me, but I liked how it felt in my mouth. I would’ve liked more chocolate flavor in the raspberry.”

Sister 2: “It would’ve been better with less raspberries and more chocolate flavor, the Bites were good. I would buy the Bites.”

Mom: “I’m very picky about chocolate but I thought this was very good. I appreciated that all the ingredients were clean. I would give it an 8/10.” (Side note: my Mom eats mostly AIP so has a pretty restricted diet. That didn’t stop her from enjoying this chocolate with us). 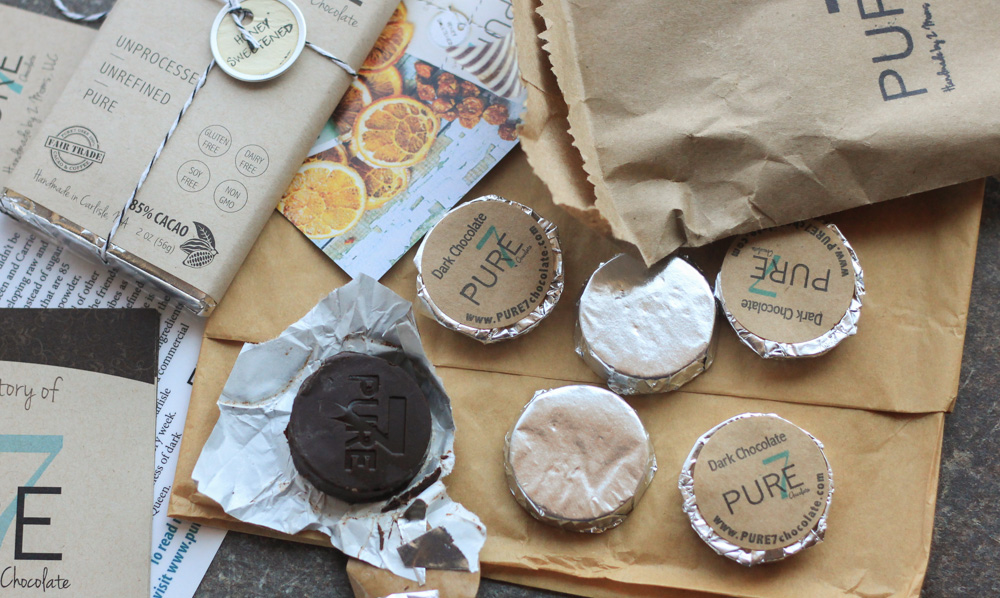 I liked that the chocolate flavor was intense but not bitter. I love dark chocolate, but some can get a little too bitter. I felt like this chocolate was very nice and dark but didn’t have that edge to it.

Despite the fact that my sister said the salted almond was too salty (bummer for her!) I thought that the salt was really good with the crunchiness of the nuts and the sweetness of the chocolate. I could just like it that way because I enjoy extra salty things, but I’ll leave it to you to decide.

The chocolate coins were especially good, because they were just pure chocolate and you could really taste the chocolate itself without having it masked by other flavors. As my Lucky Friend said, the chocolate really does melt like butter in your mouth. I’d recommend that you eat the chocolate at room temperature because we all liked the consistency best at room temp.

The flavor of the chocolate overall was sweet and, in a good way, a bit fruity (I think that could be the honey. I wonder if maybe the flavor nuances would be slightly different in the different seasons due to changes in the honey). The taste and texture of this chocolate is slightly different from the chocolate you might be used to, so it might be a bit surprising when you first taste it, but in my case I got used to the flavor and found that I enjoyed it.

The short version of my review:

Salted Almond (one of the three kinds we tried).

Raspberry (one of the ones we tried. I’d recommend it if you love raspberries)

Where to buy: So, if you’re interested in learning more or want to buy a bar or two (hey, Mother’s day is coming, people), you can visit the Pure7 website by clicking here. 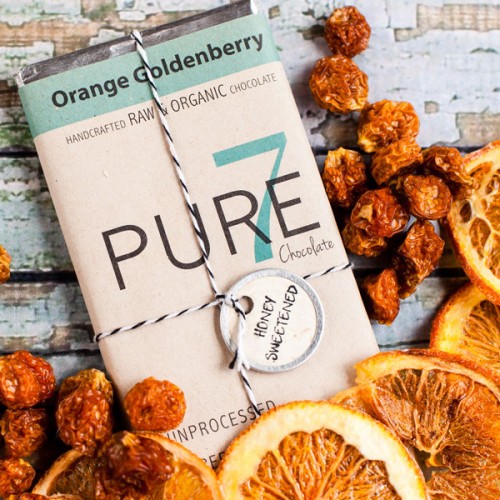