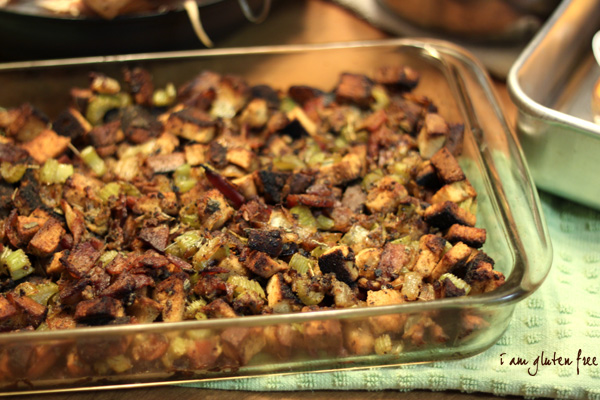 This is my Mom’s recipe for stuffing (and I think it’s absolutely delicious). She’s made it every thanksgiving for a long time.

(And if anybody’s wondering why this is in the main dishes section, you ought to know that for me stuffing is a main dish. The pilgrims might not have had it but they darn well should’ve!)

NOTE: For store-bought gluten-free bread, you can use pretty much anything. We actually have ended up using Ener-G’s gluten free bread, and if you ask me that stuff is nasty. However, cooked down in stuffing it turns out just fine because stuffing in itself is very moist.

Chop the bread into crouton-sized pieces and toast them in the oven at 400 degrees F. on the middle rack until lightly browned and crunchy. Set aside and turn oven off.

If you’re using meat: Cook the bacon or sausage in a fry-pan, then remove and set aside on plate. Chop the celery (including the leaves), and put it all into the leavings from the meat (oil). If you’re not using meat, cook the celery in the one stick of butter. Cook the celery on medium heat until the leaves are wilted and the celery is a bit soft. Add in the onion (chopped), and cook until the unions are soft (by now the celery should be fully cooked as well).

Put the cooked onions and the celery in a bowl and let set until cooled. Meanwhile, hand-whisk an egg.

Once the onions and celery are fairly cool, add the egg. Stir it in quickly so that it doesn’t cook. Stir in the sage, rosemary, thyme, oregano, salt, and pepper until thoroughly combined.

Add the maple syrup or molasses and stir.

Add the breadcrumbs, the meat (optional) and the apples or raisins (also optional). When you’re stirring, DO NOT OVER MIX! Stir very lightly and gently, because you don’t want to ruin the bread crumbs.

Add enough chicken or turkey stock to make the stuffing moist. It really depends on how the stuffing already is; if it is fairly moist and looks about right you’re done, if not, add some chicken stock and stir Very lightly and as gently as possible.

You can either put the stuffing in the turkey (below) or you can roast it in a pan with the turkey when the turkey is 45 minutes from done, or do whatever else is traditional for you in your thanksgiving meal. 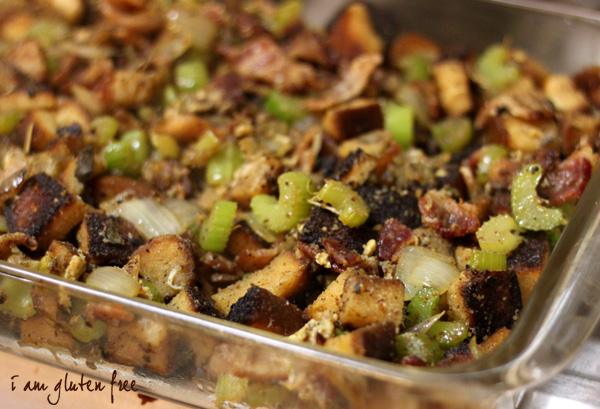