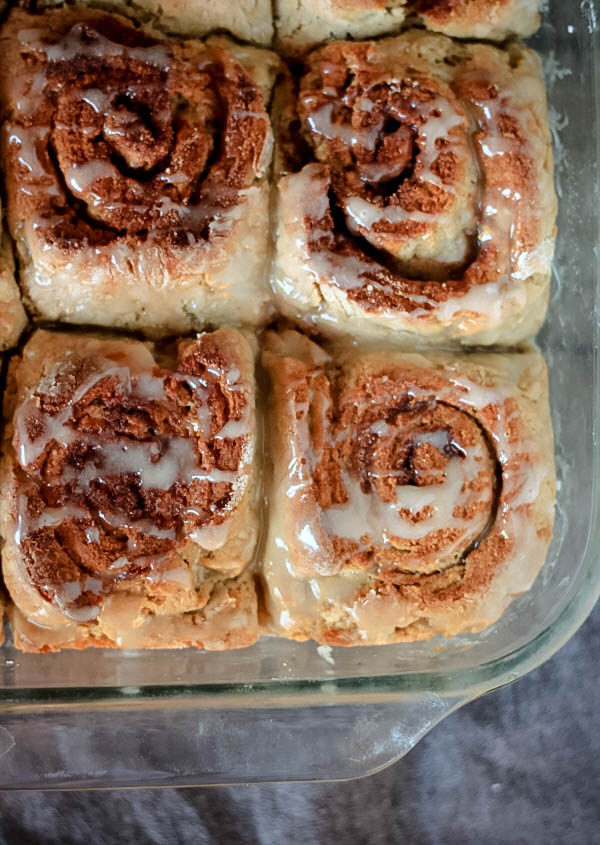 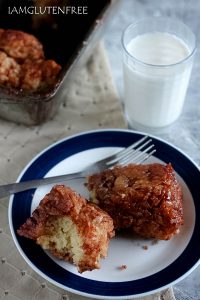 I’ve been meaning to make gluten free cinnamon rolls for quite some time now. I had a recipe before this, but that one wasn’t as good as I wanted it to be. These ones, however, are sweet, yeasty, and light.

And don’t let your cinnamon cravings end here! If you want an easy cinnamon bread recipe without all the rolling, try this tasty gluten free monkey bread. 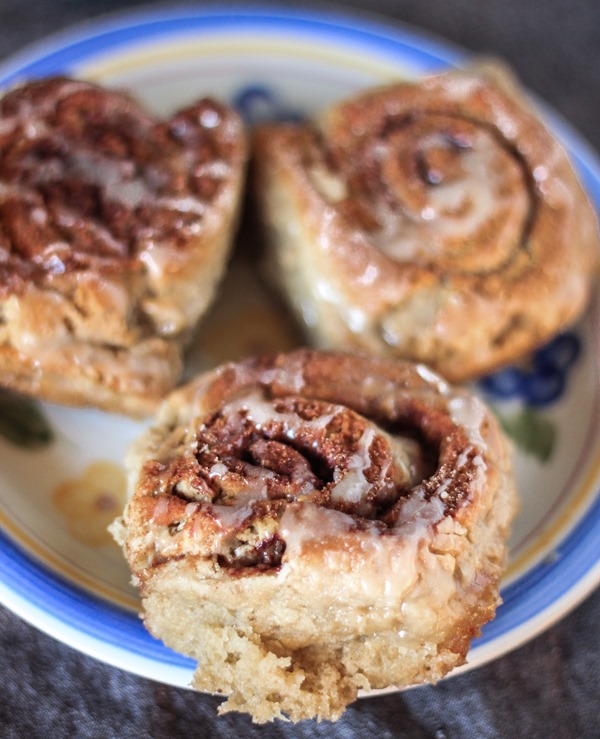 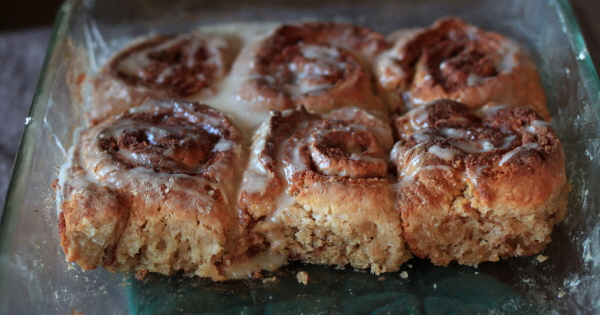 Put the water, honey, and yeast in a small bowl, then beat with a fork until blended. Put the bowl in a warm area. I usually just turn the oven to WARM and put the bowl in there. Allow the yeast to proof.

1 1/2 cups cornstarch or tapioca starch, plus 1/2 cup to be added later and more for handling dough

In a medium sized bowl, combine the dry ingredients and beat until well blended.

Combine the wet ingredients in a medium sized bowl.

Still blending, slowly pour the dry ingredients into the wet ingredients. Blend for about 2 minutes, then allow to set for around 2 minutes. Blend for another two minutes. Add the 1/2 cup starch and rice flour and blend until partially mixed in.

Lay a sheet of wax paper on your work surface and sprinkle the wax paper with cornstarch or tapioca starch. You’re going to use quite a lot of it during the rest of the process, so leave the cornstarch/tapioca starch out.

In a small bowl, mix together 3/4 cup sugar and 3 tablespoons cinnamon. Set aside.

Grate 1 stick of butter (1/2 cup). You could also chop it up into small pieces, but I prefer to grate it. Set grated/chopped butter aside on a plate next to the wax paper.

Cover your hands with tapioca starch or cornstarch and remove the dough from the bowl. I prefer to use all of it at once, but if you’d like you could do it in two rounds.

Using your hands, gently press the dough down, forming it into a rectangle, then roll it out to about 1 inch thick.

Form the dough into a rectangle, sprinkle with flour, then put a sheet of saran wrap between the dough and your rolling pin. Gently roll it out into a longer, flatter rectangle. Roll it until it is just a little bit less than ¼ inch thick.

Now the fun part. Sprinkle the dough with the cinnamon/sugar mixture, along with more butter. You may have to grate another half a stick or so. Cinnamon rolls should be nice and buttery. 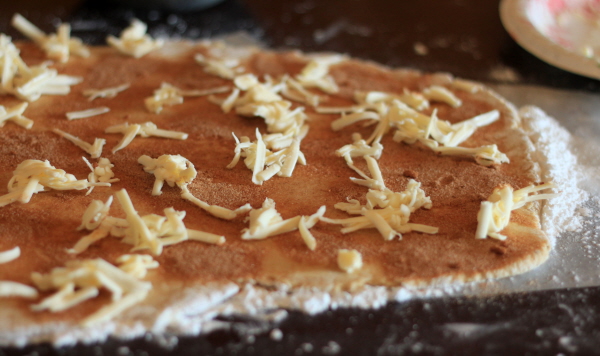 Once you’re done coating the dough in sugary buttery goodness, start at one end and roll towards the center. If you’re working with all of the dough at once and you made your rectangle as long as mine instead of more square-ish, you’d want to stop about halfway down the dough. The roll should be between 2 and 3 inches thick. 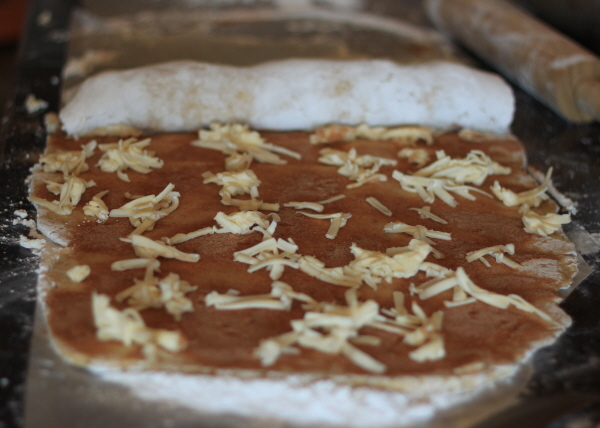 Roll in from the other end until the two rolls are right next to each other. 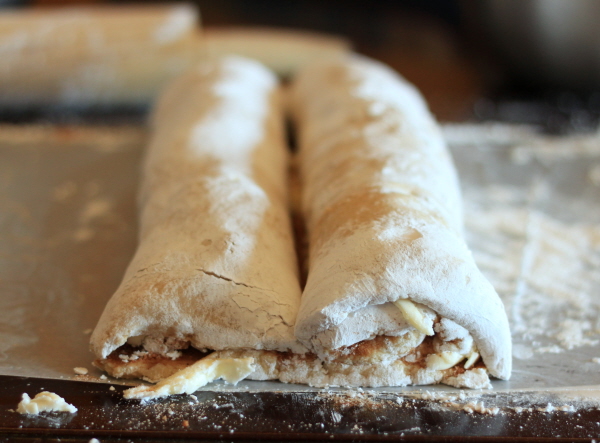 Cut between them so that they aren’t connected, then cut each long roll into several 2 inch pieces.

Butter a 9 by 13 inch pan well, then put the cinnamon rolls in the pan about 1 inch apart. Stick them in the oven on WARM for about 45 minutes to rise. 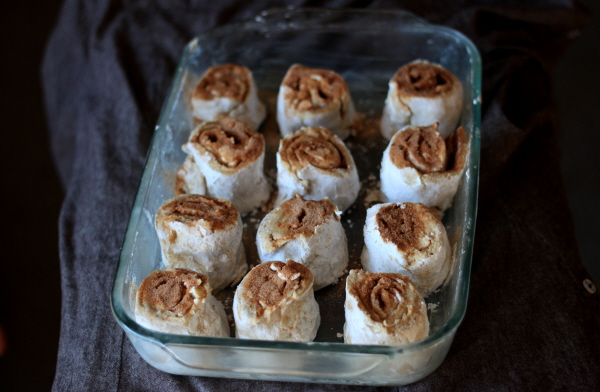 Note: If your oven doesn’t have a WARM setting, Heat the oven at the lowest setting you have and turn it off about five or ten minutes before you put the cinnamon rolls in. 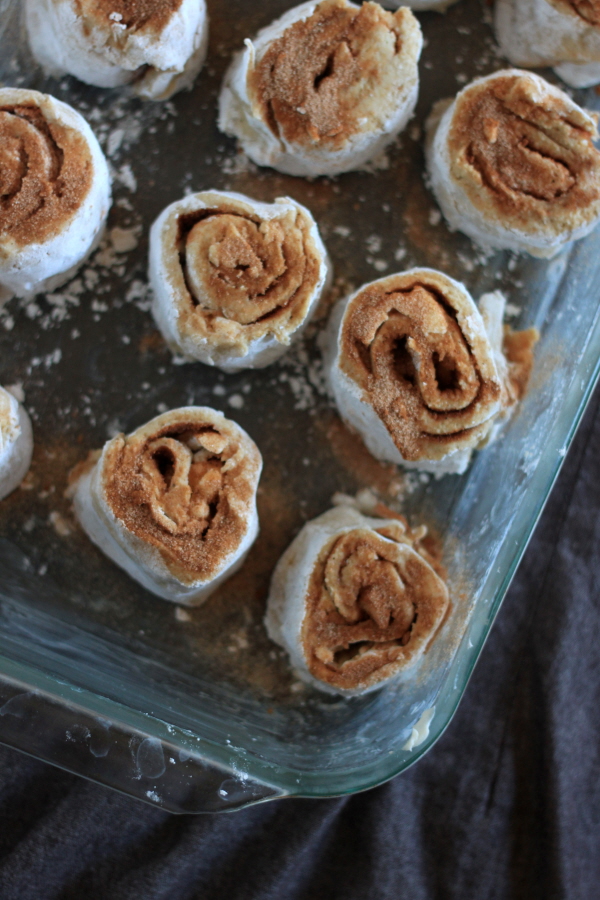 Once the rolls are fully risen, turn the oven to 350 degrees F and cook for around 45 minutes, until they are golden brown, firm, and smelling delicious. Cover with glaze.

To make a regular glaze, just stir together 3 tablespoons of milk, a pinch of vanilla extract, and about 1 cup of powdered sugar. Pretty simple. 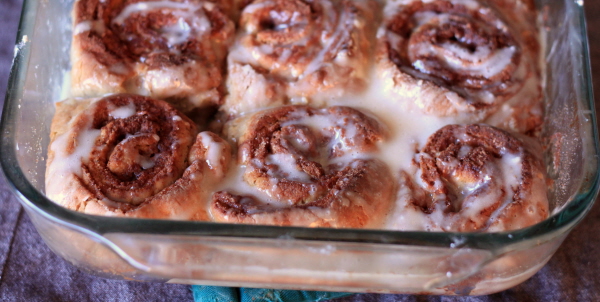 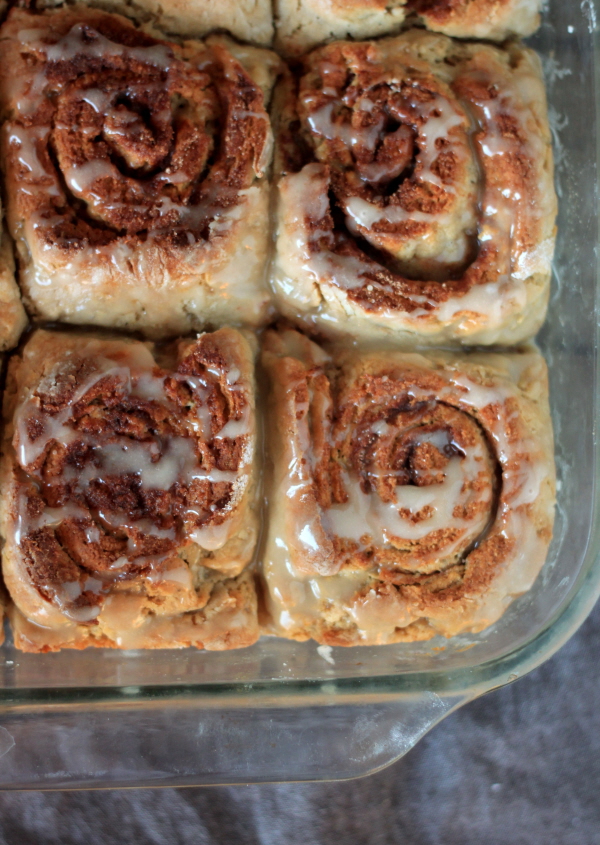