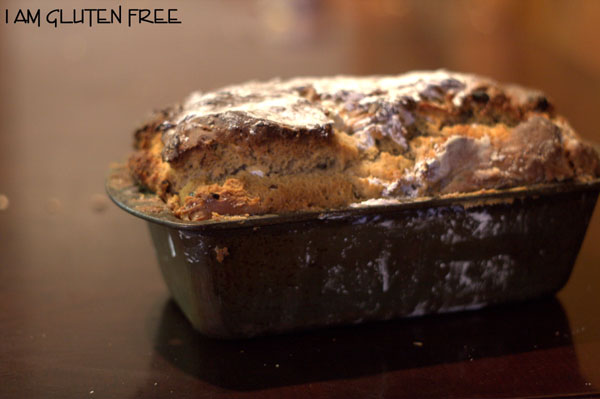 I love what my bread-maker can do for me.

I mean, it may be lacking in many places, but it still does the job.

The bread-maker I use is about ten years old. And, poor thing, its age is starting to show. The problems started a few months ago when I plugged in the bread maker only to have it start beeping in a panicked way. Then the numbers went backwards.

This problem can be fixed, I found, by turning the bread-maker on and off several times. If this doesn’t work, a good hard bang on the lid will bring its attitude under control.

Then the second digit went out. Now I only have a five to tell me that there were two hours and fifty-five minutes left. When I want to set a time for the bread to cook, I have to rely on my counting skills.

And after a long day, my counting skills aren’t always great.

So then I have to start over, turning off my grumbling bread-maker and turning it back on again.

And therefore, here’s another recipe made with the reliable old bread-maker. Combine all the wet ingredients into the bread-maker pan and stir with a rubber spatula. Set aside.

Combine all the dry ingredients into a clean metal bowl. Hand-whisk until blended. Pour into the wet ingredients and stir with the rubber spatula. The ingredients do not have to be very well incorporated because the bread-maker will stir them thoroughly.

Place wax paper on the counter and sprinkle cornstarch over this.

Grease a bread pan, preheat the oven to 350 degrees F, and mix together the Filling Ingredients.

Roll the bread out with a rolling pin, making sure it is no wider than your bread pan.

Sprinkle the rolled-out bread with the filling ingredients.

Roll the bread up.

Flip the greased bread pan over and push it down on top of the bread. Turn the bread and bread-pan over, using the wax paper.

Peel the wax paper off and place the bread in the oven. Place a pan beneath it in case some of the butter melts off.

Cook for forty-five minutes to an hour, until firm in the middle and brown on top. A knife inserted in the center should come out clean.