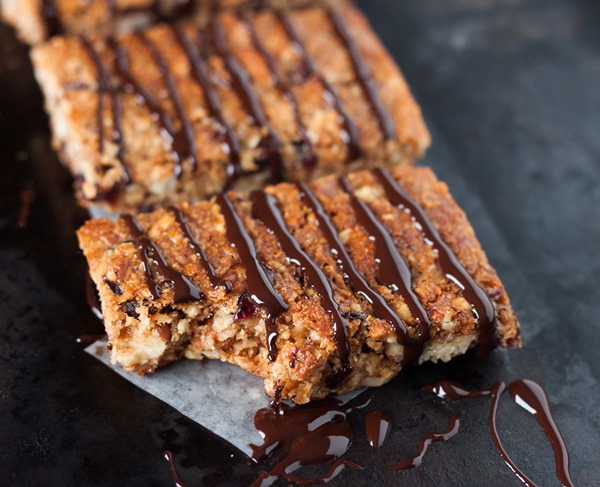 I’ve made so many batches of non paleo, somewhat paleo, and completely paleo granola bars that I’m surprised anyone dared to eat these at all.

It isn’t that the former batches were bad. They just…weren’t…good. They had all the granola bar flavor, but none of the “stick-together-ness.” 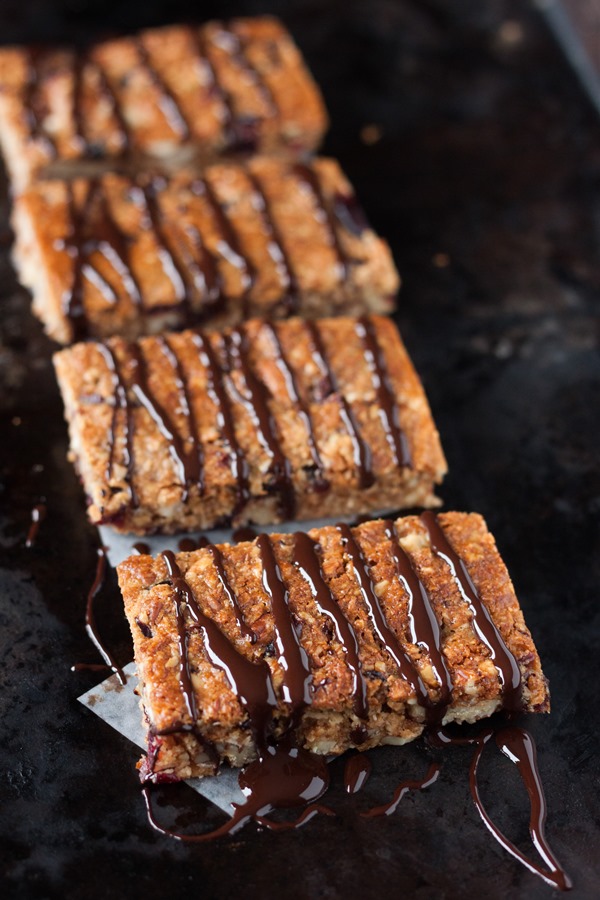 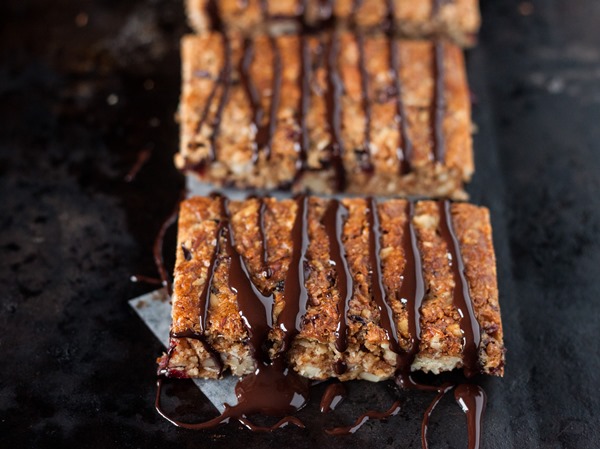 So I guess you’d call this a failed recipe, because it isn’t crumbly breakfast granola. These bars actually stick together. 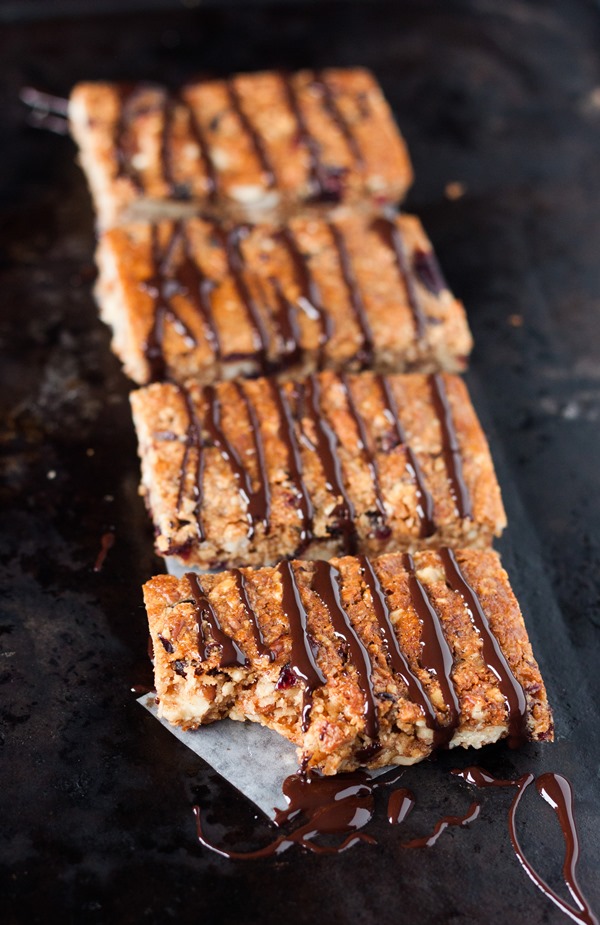 And they are chewy, just like a granola bar is supposed to be. Finally. A granola bar that holds together. That we can put in a container in our greasy lunch bag and take all the way up to the ski area and toss around and shake the container for fun and still have a granola bar. 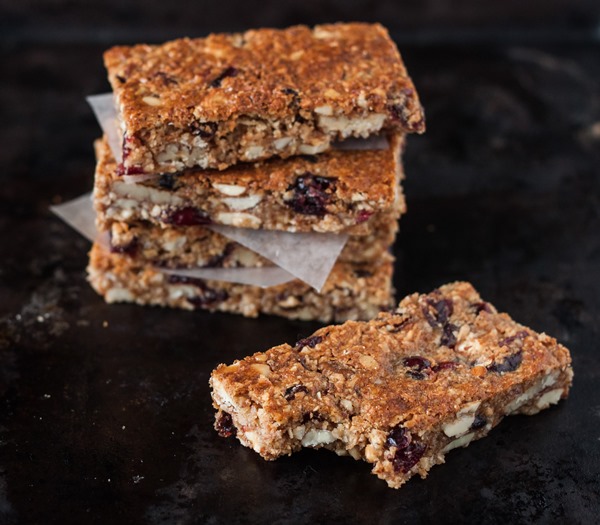 don’t they look lonely without the chocolate?

Not to mention OAT FREE and pretty nearly paleo (depends if you eat honey, nuts, and peanut butter). After making all of those stupid oat granola bars it was the paleo granola bars that worked. 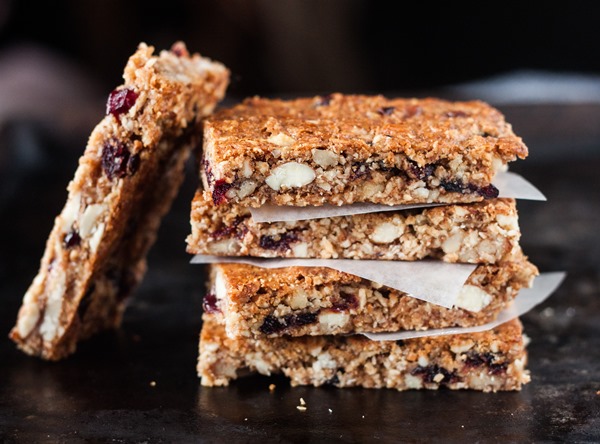 I will now present you with my triumphant smile. (this is the part where you’re supposed to have a hungry smile, or maybe a jealous frown.) While you frown with envy, I will now bite into one of these bars and laugh maliciously.

Forget it. We don’t have any left. 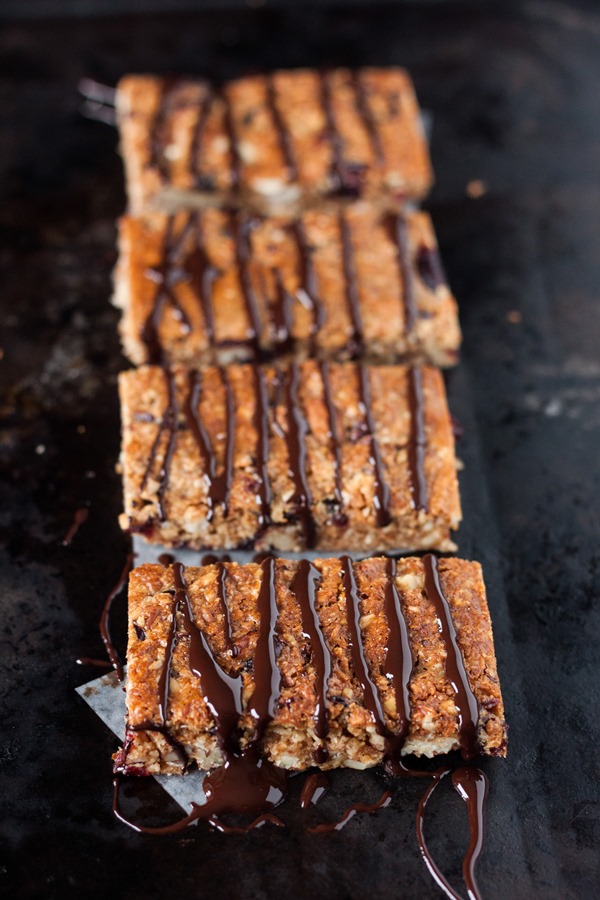 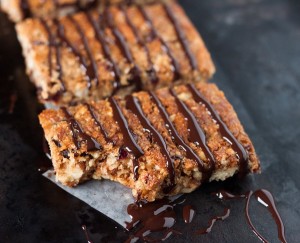 Print
Prep time
20 mins
Cook time
25 mins
Total time
45 mins
These granola bars are chewy and soft, yet the occasional whole nut adds a pleasant crunch.
Author: Linnaea
Recipe type: Snack
Serves: 10
Ingredients
Instructions
Notes
Can be stored in an airtight container for about a week. If you want to store them longer, freeze them.
3.5.3226

Okay then! Here are the cool step by step directions (because obviously granola bars are just so hard to make).  Actually, I just felt like taking pictures when I made these. So you get some useful (or not so useful) step-by-step photos.  Put a sheet of parchment paper into a 9 by 13 inch pan. Preheat the oven to 350 degrees F.  If you use super cool all natural organic honey straight from a giant bucket like we do, then you’ll have to melt it in a little pan. First, measure it out, then stick it in a saucepan and melt on medium-low heat. 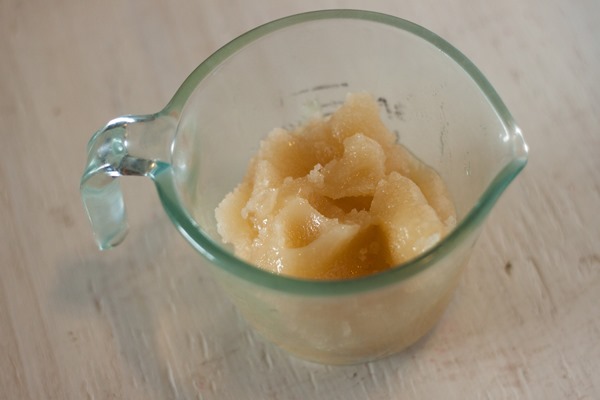 Spoon the 3 tbsp peanut butter into a bowl and add the salt and cinnamon. 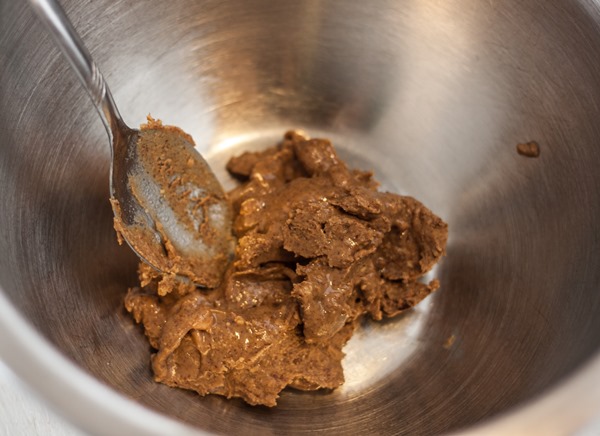 Since our blender is a weakling, I chopped the nuts one cup at a time. If you have a STRONG blender, just put them all in at once. I blended until part of the mix looked like a really coarse flour but there were still a few whole nuts in there: 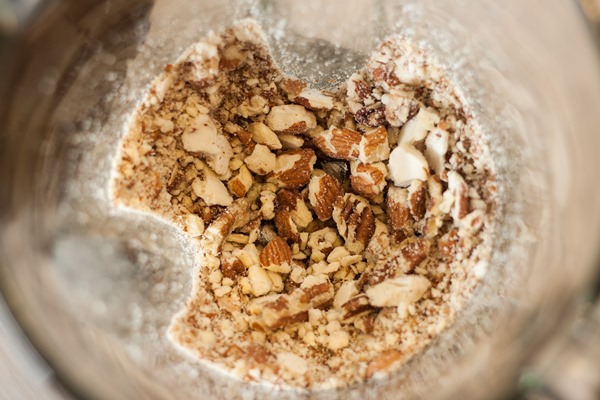 Dump the nuts into the bowl with the peanut butter, salt, and cinnamon. But don’t stir yet. 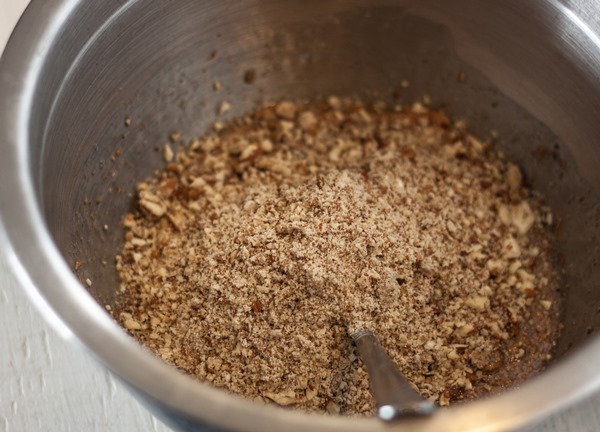 Measure out 1 cup of raisins or dried cranberries, then dump the dried fruit on top of the nuts (which you still haven’t stirred in). 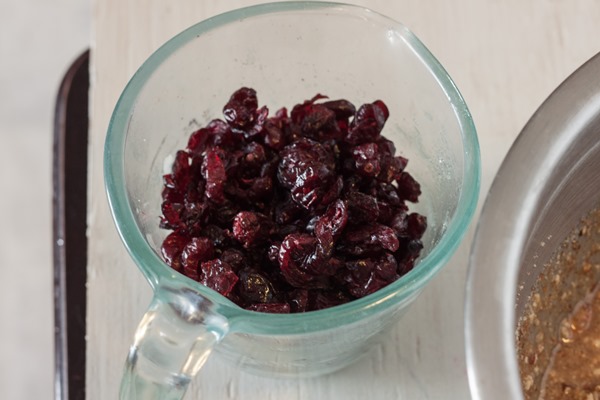 I used dried cranberries. We were out of raisins.

Add the 2 cups of coconut in a flood of beautiful whiteness that looks like snow on a ski hill (sorry, I get kind of carried away with coconut. It’s amazing stuff). 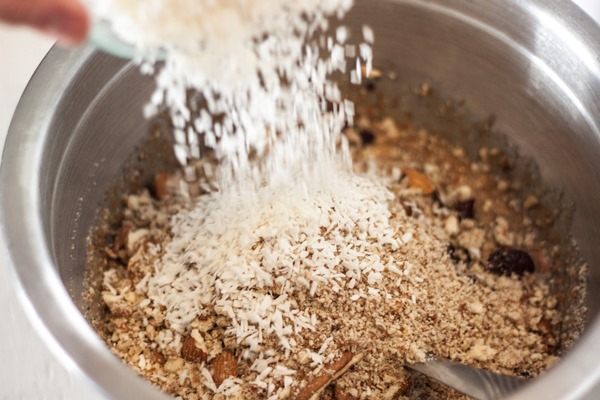 Remember, you still haven’t stirred anything together. Pour on the melted honey 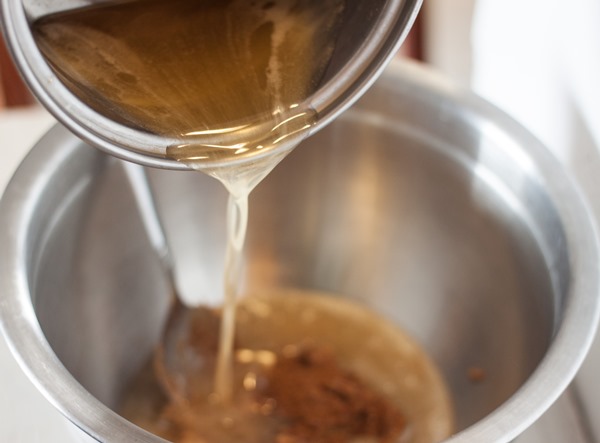 Yes, NOW you can stir. Stir it until it looks about like this: 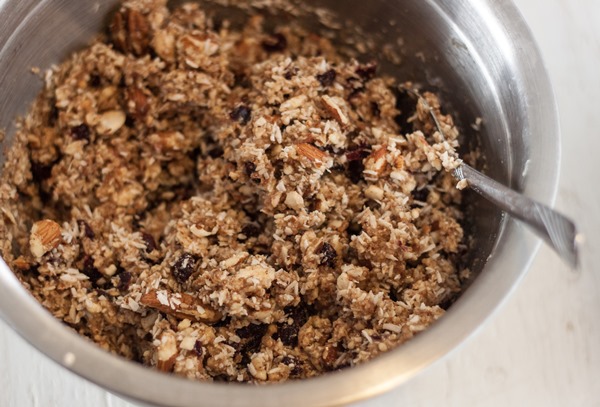 Then press it firmly into the prepared pan. Cook for about 25 minutes on 350 degrees F, until the surface is golden brown. The bars will be pretty soft and not at all firm. It will scare you like it did me because you’ll think that your granola bars have failed. But be patient. 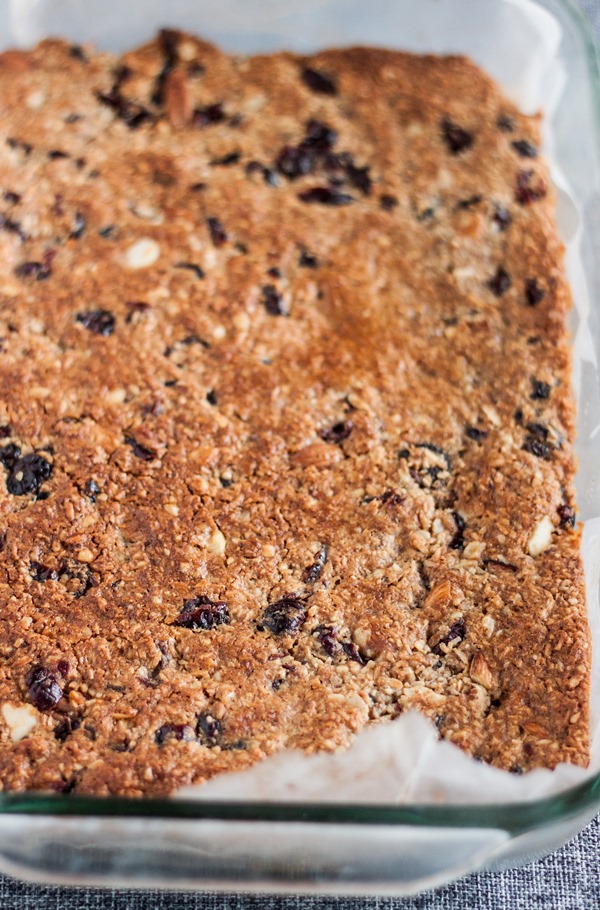 DO NOT cut it yet. Just don’t. Instead, leave it on the counter to cool for about an hour, then put it in the refrigerator to cool for another hour or so. You don’t want to cut the bars until the bottom of the pan is completely cooled. Once the bottom of the pan is cooled, cut the bars into neat rectangles. If they don’t come right off of the parchment paper, flip the whole thing quickly onto a cutting board, pull the pan off, and then gently peel the parchment paper away. Drizzle the bars with chocolate. Because that is absolutely necessary. Below is a paleo recipe (if you eat honey anyway). Be aware that the drizzle is not at all sweet—the bitterness of the chocolate contrasts nicely with the sweetness of the granola bars.

Paleo Chocolate Drizzle Recipe 4 ounces 100% dark chocolate ¾ teaspoon coconut oil (yes, OIL. Not butter) ½ teaspoon honey   Melt all of the ingredients together in a double boiler double boiler until everything is completely melted. Drizzle over the bars, then put the bars in the freezer for about 10 minutes until the chocolate solidifies. Store the bars in an airtight plastic container. 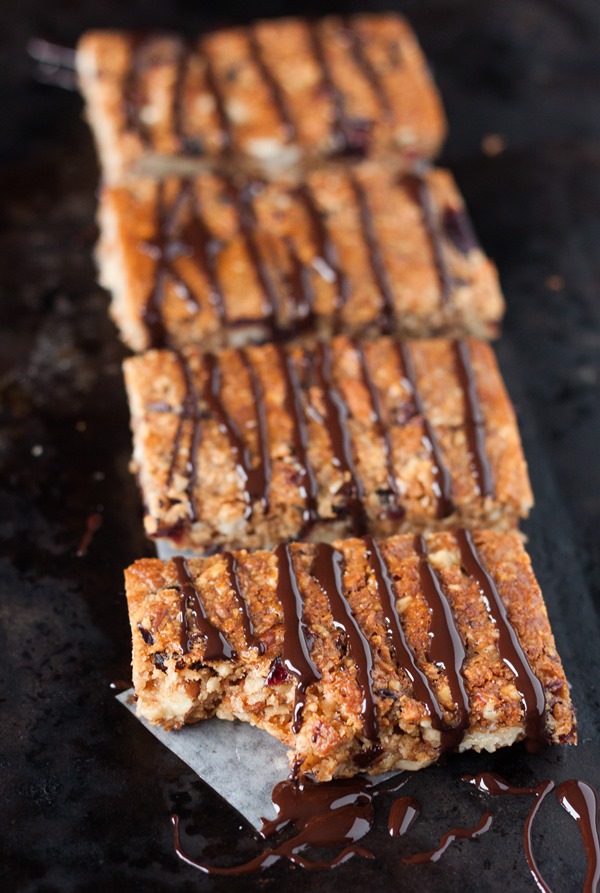