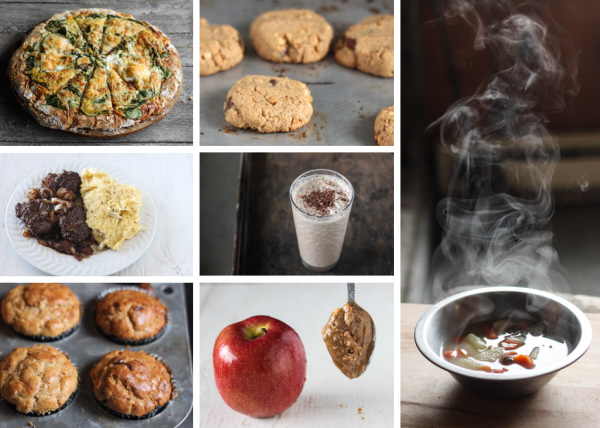 So recently I’ve had a bunch of people asking me what we eat for meals.

I didn’t really think about it before, since usually breads and pancakes and desserts are what people miss, but really it is hard to make good, healthy gluten-free main dishes. Cooking used to be so much easier, right? On nights you didn’t feel like it, you could just make some mac and cheese or hamburgers or go out to dinner. Now you can’t do that anymore.

So anyway, last Wednesday I decided to take a week to track what we ate and (when I could) photograph it. Here are the results.

One quick note before we begin: We are definite meat eaters not only because we love beef (duh) but also because it’s readily available to us. My family raises grass fed organic beef, so we just end up eating a lot of meat. None of us mind. 🙂

If you’re interested in learning more about the ranch, our lifestyle, my cool parents, or our amazing, mouth-watering (yes, now I’m bragging) beef, you can find the website here.

Breakfast. We don’t have much time to do huge breakfast projects on weekdays, so today totally could have been mashed up rice cakes with milk (seriously, some of my sisters do that. They say that it tastes like rice krispies. Don’t let them lie to you. Rice cakes taste like popcorn that has been laying on the pavement in a gas station for a week). 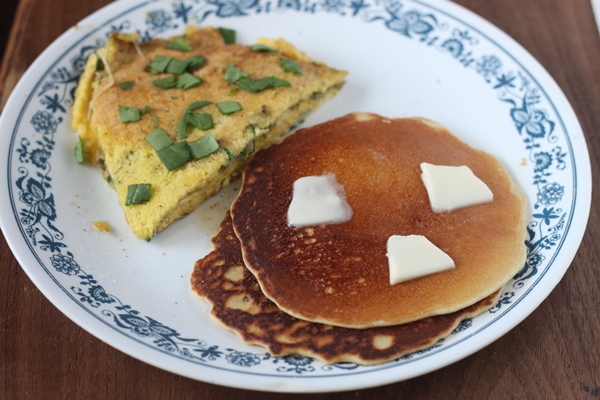 So instead of mashed up rice cakes with milk, I had pancakes and an omelet. With only four burners (and therefore four pans) it takes a little bit of slick trading to get two pans all to myself, but I managed it. The pancake batter took me about 5 minutes to whip up, and then while the pancakes cooked I made the omelet. I used this recipe for the pancakes. For the omelet (which served 3 people—I used it for trading for the pan):

A few leaves of spinach

A few slices of dubliner cheese

A sprinkle of rosemary (rosemary  is amazing)

(here’s where you’d add a few bits of bacon or sausage, but since we didn’t have any I skipped that)

First, the pan went on medium low and I made sure it was very well-greased with butter. If it isn’t well buttered the omelet will stick.

I blended the eggs up in the blender to get them nice and foamy, then poured them slowly onto the heated pan. After about a minute of cooking I sprinkled it with all the prepared toppings. When it seemed like it was ready (the edges begin to pull away from the pan and the eggs seem stiff enough to flip), I folded it onto itself, cooked for about a minute, flipped, cooked for about a minute more, and then cut it up and ate it with the pancakes. I sprinkled it with a few chopped spinach leaves, as well as some more salt and pepper.

So that was breakfast. For lunch…

Lunch: After a full breakfast I wasn’t really hungry at lunchtime (and I also knew that we’d be having a big supper because we had friends over for dinner that night), so I just had some apples and peanut butter. Keep it simple. 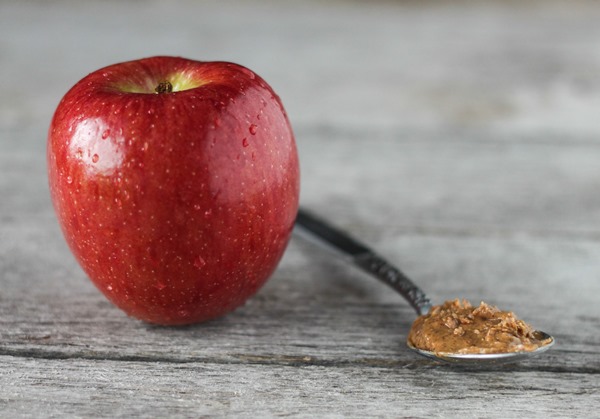 Note: For lunch we everybody usually just “grazes” for about an hour in the mid afternoon. It’s a little bit chaotic, but usually my dad and some of my sisters are outside working on the ranch, my little sisters will have disappeared on an adventure, and everybody else is busy, so it’s not really easy to get everyone together for lunch. When we are hungry, we come in and eat food. Everyone cleans up after themselves (or at least they are supposed to). 🙂

As I said, tonight we had friends over. Tonight we had two chuck roasts that needed to be eaten, but my Dad also had some fish to cook. So we made it a “surf and turf” dinner with a basic lettuce salad, baked sweet potatoes, carrots chopped then roasted in oil in the oven for an hour, the chuck roasts, and the salmon. We also had some canned dilly beans that we canned last fall. Unfortunately I didn’t get around to photographing any of it.

Breakfast today was great. I made the breakfast pizza that I posted about not too long ago. 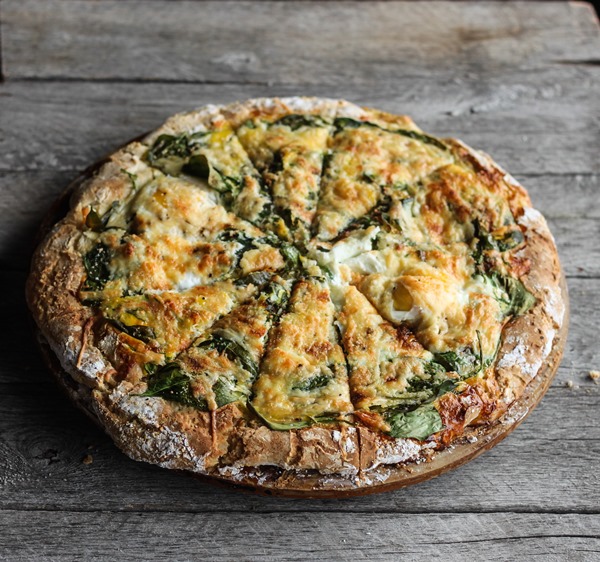 Early Afternoon Snack: Some days I’m hungry for a snack and some days I’m not, depending upon how much breakfast I had. Today I made a sugar free chocolate smoothie. For the smoothie I melted some 100% chocolate, a little bit of honey, and some milk together in a small saucepan the day before (on Wednesday), then put it in the freezer overnight. On Thursday all I had to do was chop up my big chunk of frozen smoothie mix, add a little more milk and some vanilla extract, then blend it up. 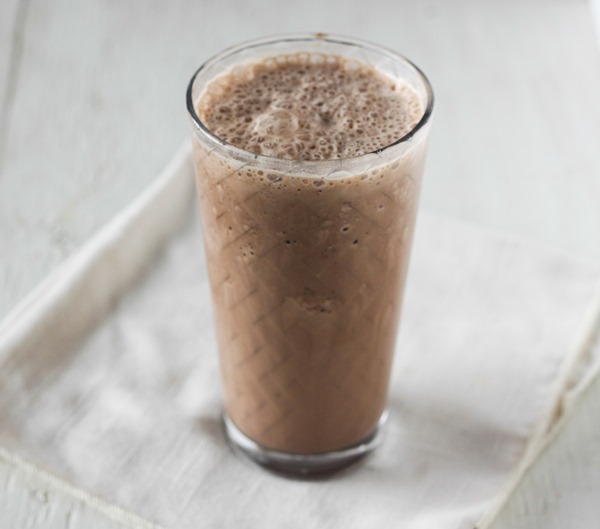 Lunch: I heated up some sweet potatoes left over from the night before and fried  some quick ground beef with seasonings (rosemary again), and caramelized onions. 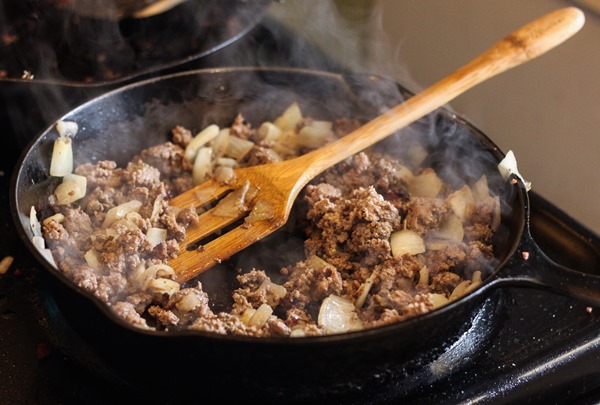 I made it a good full lunch because I knew that I probably wouldn’t get much of a supper later on.

Supper: I left for town at around 4 o’clock today, so didn’t have time for supper. Instead I just bought 2 gluten free granola bars at the grocery store and munched on those. 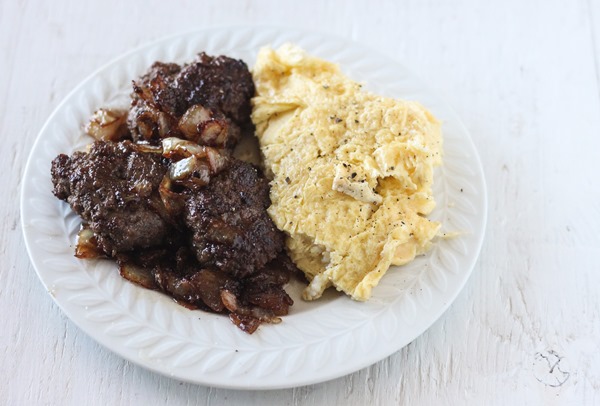 For the breakfast sausages I used ½ a pound of ground beef, with about a teaspoon of honey, and some rosemary, salt, onion powder, sage, oregano, and pepper. After stirring that all together I shaped them into small round sausages and cooked on medium with the onions.

Lunch: Skipped it because I had a good breakfast and wasn’t that hungry. My little sister made some “healthy banana ice cream/smoothie” for me to try so I had that. I’m afraid that the recipe and directions for making it are confidential. She told me that under No Conditions could I share her recipe. I barely got by with the pictures. 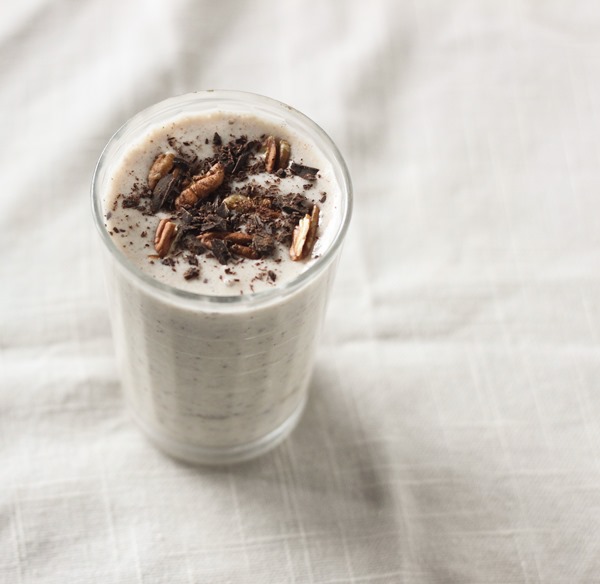 Supper: We still had some leftover sweet potatoes since no one will eat them but me, so I made them into sweet potato casserole (which everyone will eat). My sister made some roasted carrots, and my Dad also cooked up two sockeye salmon that weren’t quite sale quality. We enjoyed them. 🙂 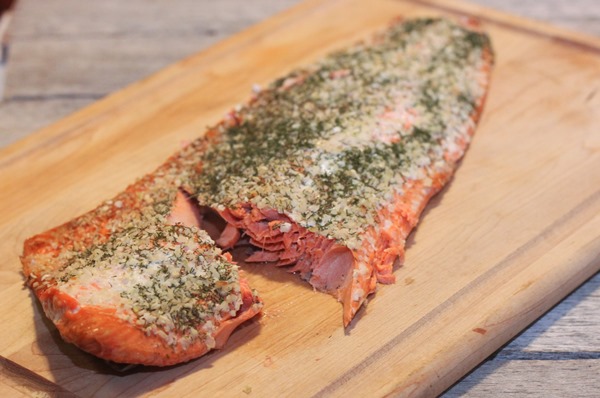 Today was a little different because my sister and I went skiing all day. We usually get up around 6:30 and don’t get back until dinnertime. I’m not hungry at 6:30 in the morning, so I skipped breakfast and had a granola bar when we got to the ski area. For lunch I had some chicken salad that I made the night before, along with a some trail mix, more granola bars, and an apple with some peanut butter. Usually we make sandwiches with the chicken salad, but I didn’t have time to make bread on Friday night because didn’t decide to go until around 10:00 PM, which didn’t really leave time for preparations. 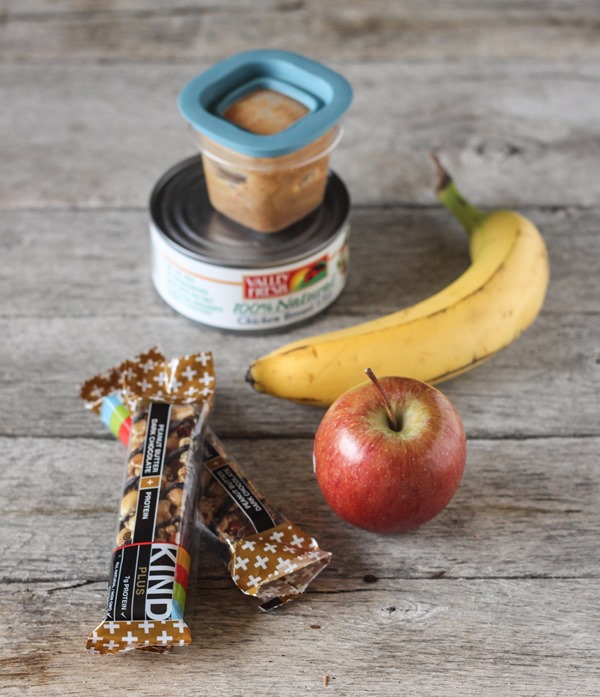 Eating on the ski hill–I didn’t have time for anything elaborate so I made a can of chicken into chicken salad.

When we got home we had some hot beef soup with carrots, onions, potatoes, and celery in it. It’s very nice to come home from the ski area and have hot soup waiting…My Mom doesn’t come skiing with us (partly because 7 kids make a lot of noise and she appreciates a little bit of peace every now and then), so usually she has hot food when we get home. Wonderful.

Breakfast: Made breakfast sausages with caramelized onions again, also had a boiled egg. 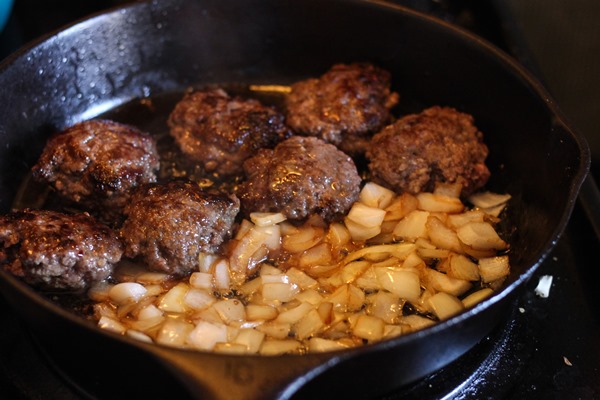 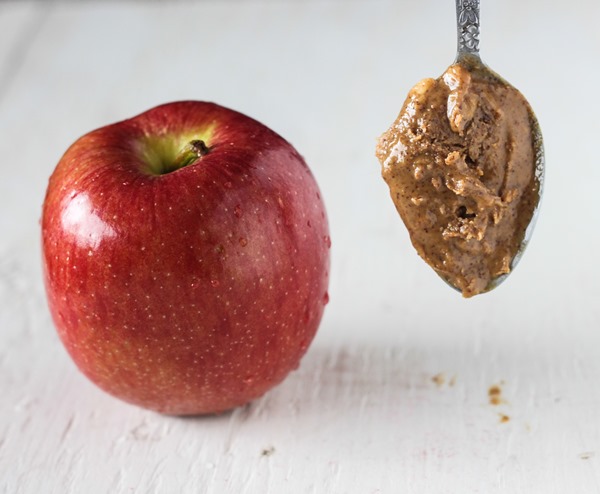 A note about the soup: Usually we’re pretty busy on the weekends, so my mom makes a big pot of soup (often we make it on Sunday afternoon instead of Saturday) to last through Sunday and Monday. To change it up a little bit we add some different spices on Monday to give it a slightly different flavor. For example, on Saturday-Sunday we had cumin, rosemary, salt, and pepper in the soup. On Monday my sister added a little bit of curry powder, which complemented all  the flavors we already had. 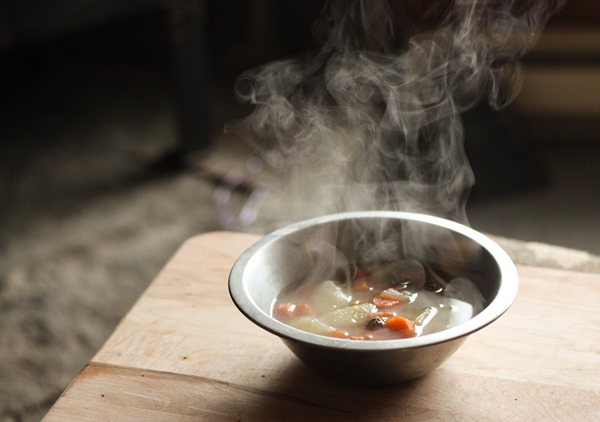 Breakfast: My parents bought some sausages and Costco on Sunday, so on Monday we had Costco sausages and scrambled eggs for breakfast.

Lunch: Soup. It’s nice to have the premade soup on Mondays because we’re always super busy. The soup does get a little old after having it several times in a few days, but it’s useful because we don’t have to make food. 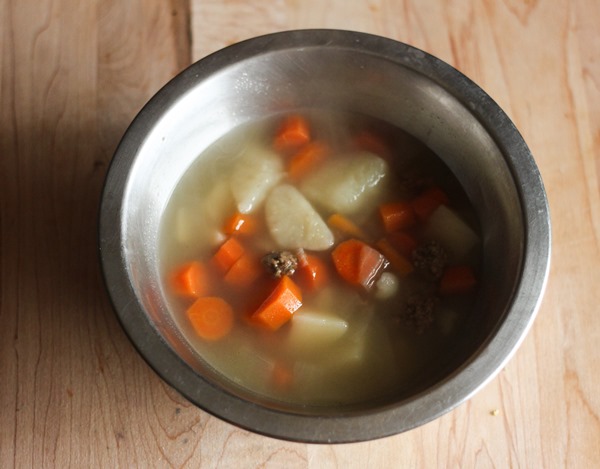 Snack: Sugar-free, dairy-free, grain-free peanut butter cookies. The recipe for these is still in progress, and I can’t say that this batch was a huge success. My sisters said some mean things about them so my feelings are permanently wounded. 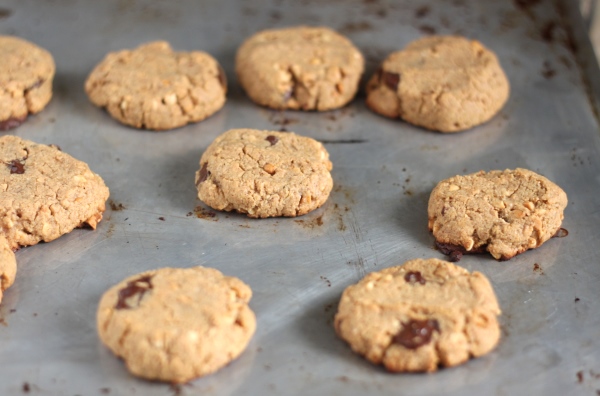 Supper: My parents had steak. My Dad had to test one to see how it should grade when he sold it, so he and Mom ate that. My sisters and I each had a slice.

Some of us had the soup (including me) because we got there after everyone else had taken the last of the gluten free tortillas. With a little ground beef, tomato paste, olives, peppers, and cheese, you can turn a tortilla into a tortilla pizza. So they had tortilla pizzas, which was totally unfair. 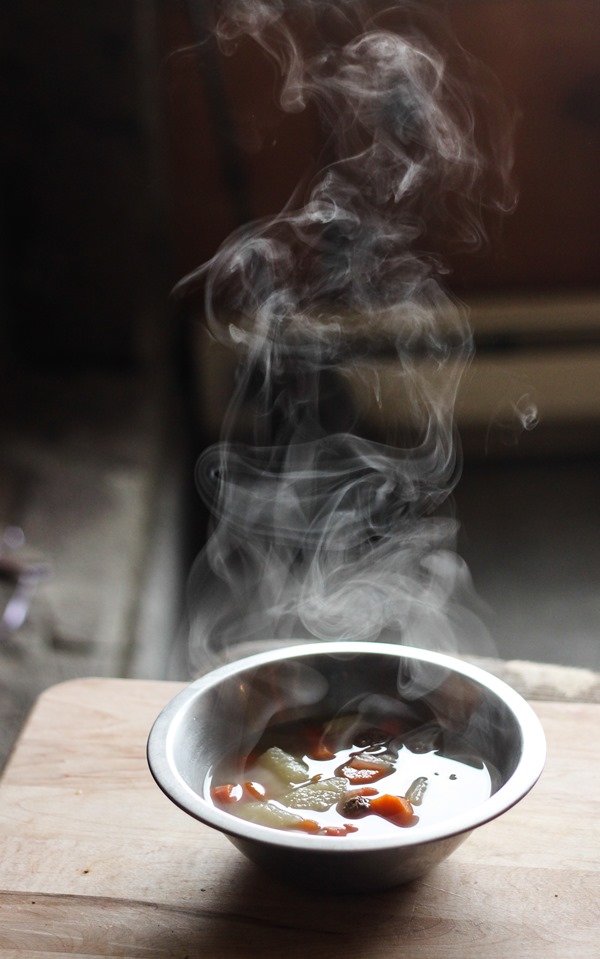 Breakfast: Costco sausages. On Monday I had a chicken apple sausage, so today I took red pepper and spinach, which I thought was way better than the chicken apple. Besides the sausage I had a banana muffin. 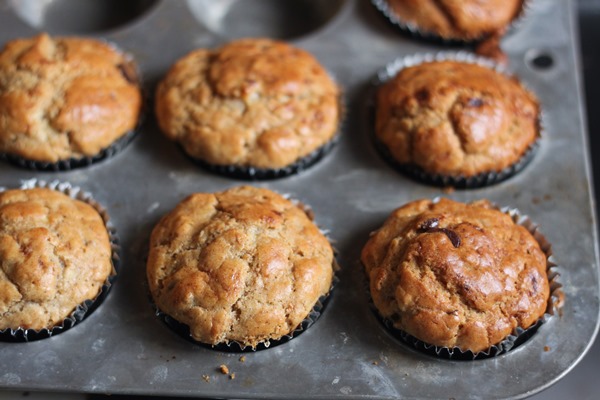 Snack: Chocolate smoothie. Again, I premade the mix the day before so it could get good and frozen. 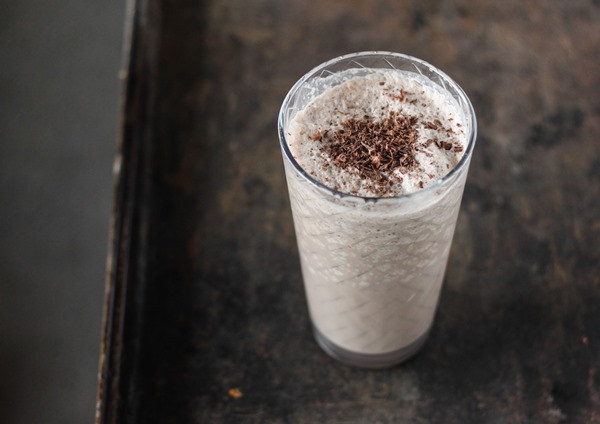 Lunch: Hamburgers cooked with spinach and onions. Salad on the side. 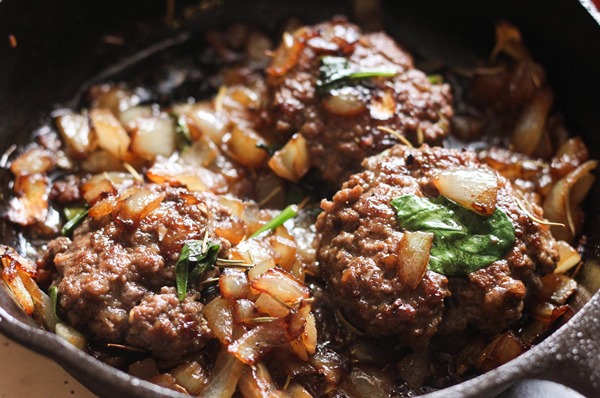 Supper: Squash soup and fried ground beef with onions on the side.